Good behavior and good health for the modern housecat

All cats are territorial to a degree. But for some cats territory is everything, and they'll do whatever they must to be top cat and rule the house. Haven't we all thought we heard a cat say "Everything here is mine mine mine!" Being overly territorial can lead to problems such as constant battles for dominance, and frequent fighting. Often those feisty females or brutish boys will use their urine as a weapon to show who's the boss. Or rather who "wants" to be the boss! For some cats if any 4 footed creature comes near The Castle the alarm goes off that it's time to fight and defend their turf which can lead to spraying.

When used in conjunction with Convivial House Cat the effectiveness of our wonderful product is boosted. Many customers alternate Territorial Rescue with Multi Cat Household. When used together both flower essence formulas will assist with litter box aversion or litter box domination which you may observe when one cat tries to prevent the other cats using the box.

Priced for a bottle with a dropper. But some people prefer a mister top so they would be able to spray this formula around the house and on objects. You could also spray it on food or in the water bowl. If you would like a mister top instead of the dropper you can order one for just $1 at the bottom of this page.

We only ship to the U.S. 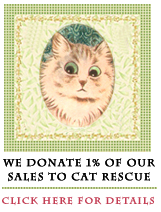 Every bit of Cat Faeries text is original. It was written by our behaviorist and it is based upon our years of experience with every item we have carefully selected just for you. All of our text and photos are copyright protected. If you should be foolish and dare to copy it, you will be sent immediately to the pound, and hunted down by our legal team who will prosecute you to the full extent of the law. Our intellectual property lawyer was a pitbull in a past life.
Copyright © 1993 - 2019, Cat Faeries™